Siri Vittrup: The Mountain and the Seashell

In Siri Vittrup’s first solo exhibition “The Mountain and The Seashell” the audience are admitted into a dreamy landscape, that uncovers the human paradox of striving towards both the stationary, the perpetual motion and the constant drifting towards a larger context.

Something has washed over the gallery. Or perhaps washed up? From the beach, from mountains or somewhere else in nature entirely?
The room is bustling with life and has been colored by natures palette of colors. The audience steps into a fully formed, energetic space, wherein textiles float from the ceiling and compressed landscapes of rivers, mountains and unknown cities meet the eye.
With pieces created using rabbit skin glue and pigment, dyed textiles, paper, pastels and oil on canvas, Siri Vittrup intuitively and playfully explores her motives, the relationship between colors and the expression of the different medias in her attempt to capture that fleeting moment of the present and locking it down in all its delicate fragility.

Vittrup’s universes revolve around utopian moments that, at least for a while, give us a sliver of hope of uniting humanity, a symbiotic relationship with nature and cities, always with a longing for whatever is just beyond the horizon, the next street over, or entirely beyond reality.
Each piece presents its own narrative - sometimes just hinted at and other times fully underlined. The main motives are often people in colorful clothing, that almost seem to merge with their surroundings, that have come to a complete stop or are heading to a destination, often followed by horses or dogs, in the shadow of plants and landscapes, that have been allowed to grow undisturbed.

In a new oil painting “Two Rivers, Many Souls” a woman floats by in a boat loaded with roes and dogs. The river shows tiny flower arrangements floating by and inadvertently reminds us of a parade. Is the woman singing songs of happy praise or of sorrowful mourning?
In the piece “Waterjar, Soil and Hills” two figures are seen meticulously tending to the landscape. One is watering while the other toils the ground. Their faces are blurred as if they’re disappearing or just about to take shape as the landscape comes alive. The miracle of nature is a testament to prehistoric treasures from the sea, now buried in the dry dirt.

A common feature in the exhibition are the compositions and a desire to to work with the inherent traits of the different medias. Whether they be textiles, collages or oil on canvas, Vittrup creates her color surfaces in layers and then adds different textures, before she finally adds figures, people and animals. Vittrup calls this a game of colors and a wish to manifest a universe - like a child setting their imagination free and allowing the stories and their fantasy to live a life of its own.

Siri Vittrup is a graduate from the The Royal Danish Academy of Architecture in Copenhagen in 2014.
From 2016 to 2021 she worked for Henrik Vibskov creating installations, exhibitions , prints and art objects.
Since 2018 she has been represented in different gallery settings and has been affiliated with Formation Gallery since January.

The exhibition is part of Art Week, June 9th - June 19th. Thursday, June 16th, in collaboration with Art Week, there will be an Art Morning in the gallery. Siri Vittrup and modern dancer Johanne Chemnitz will present a performative ritual, creating a meditative space before the workday begins. More on artweek.nu 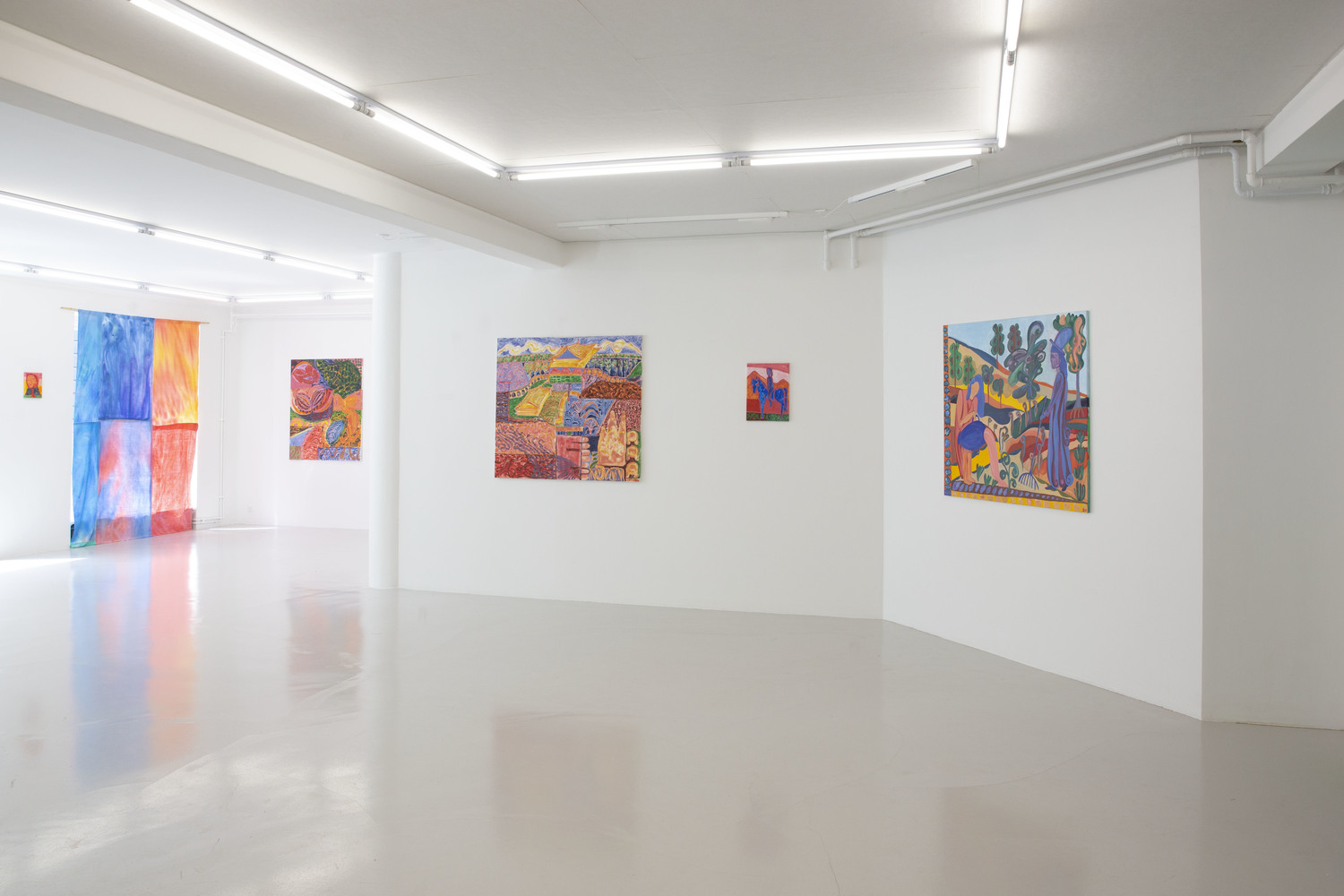 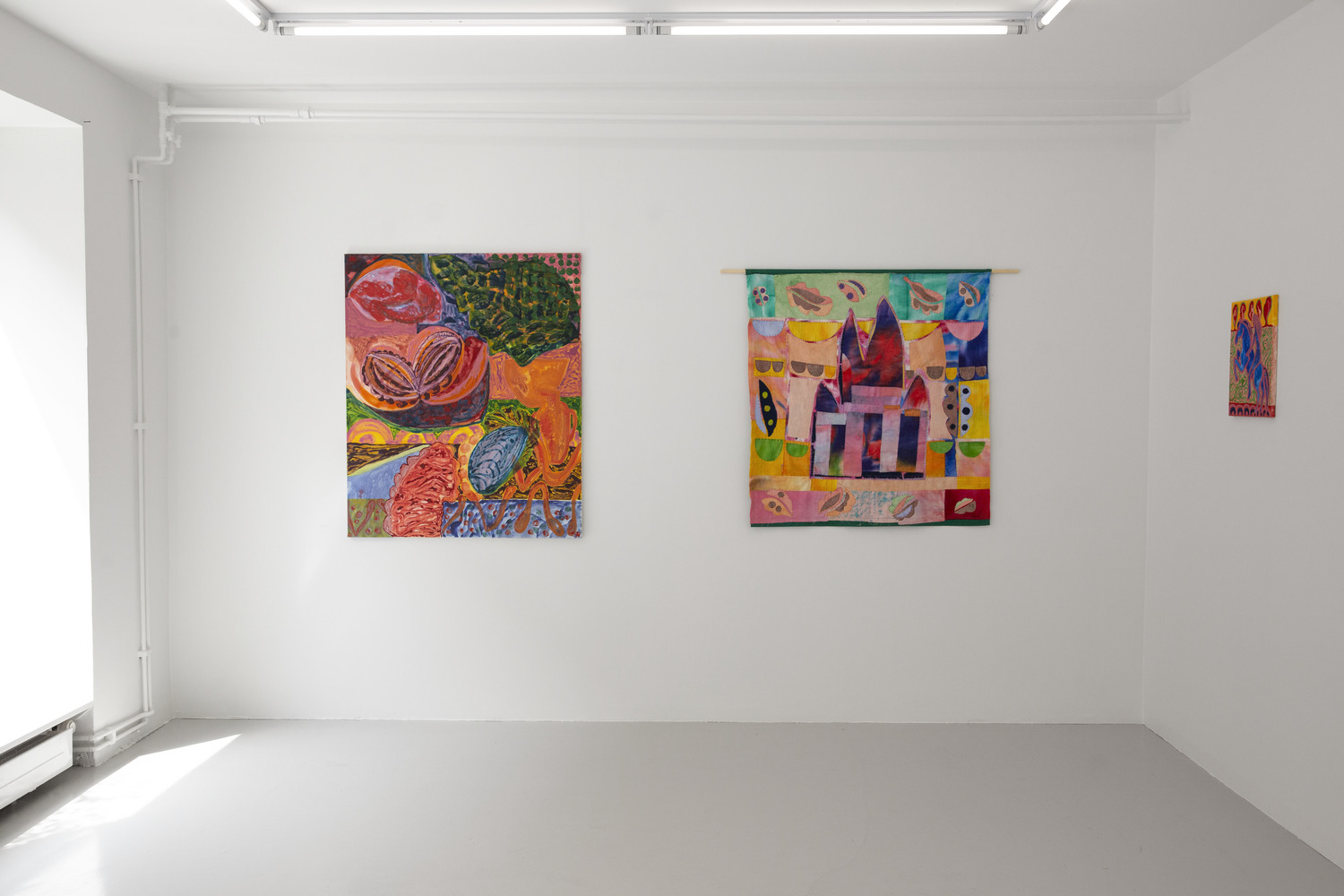 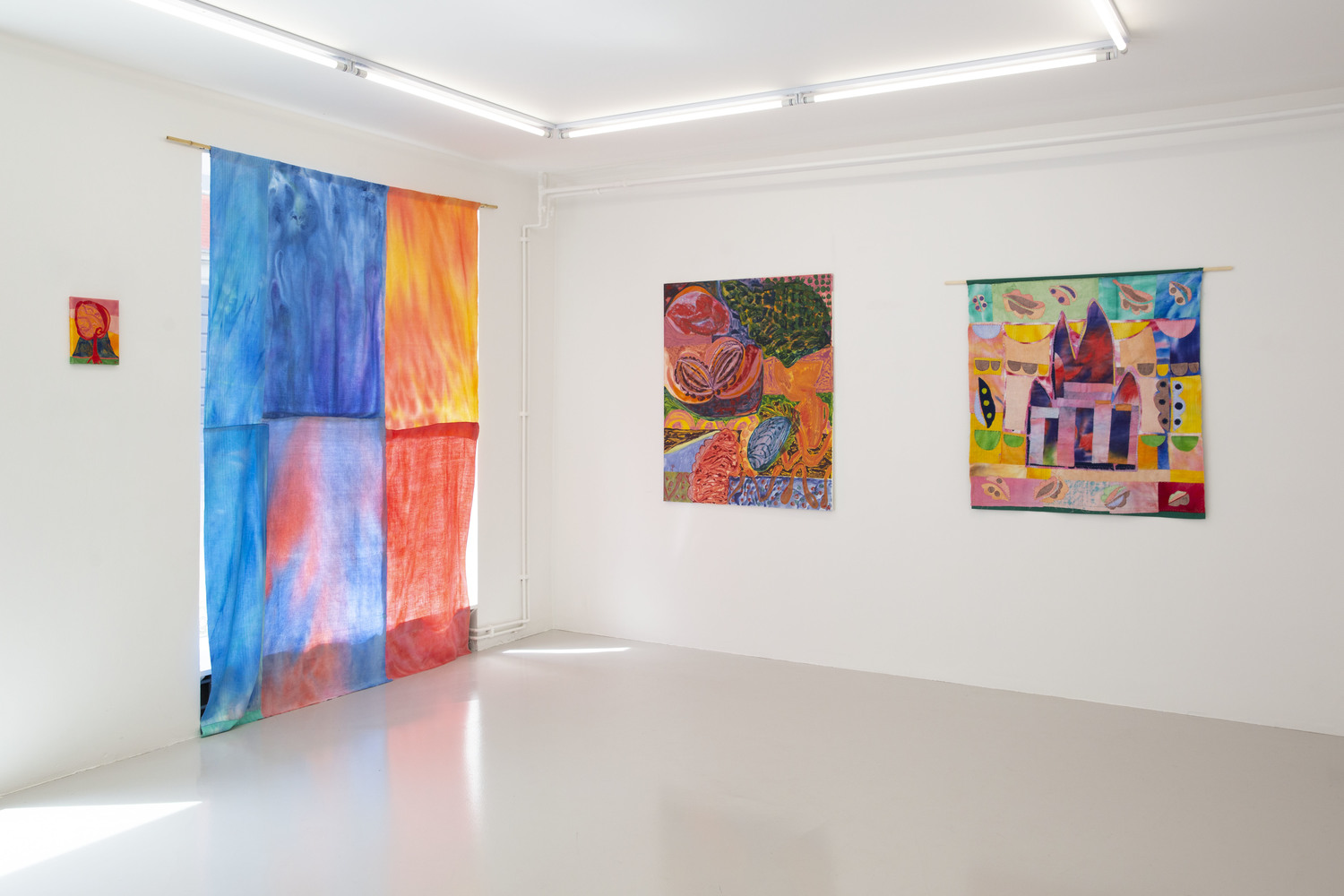 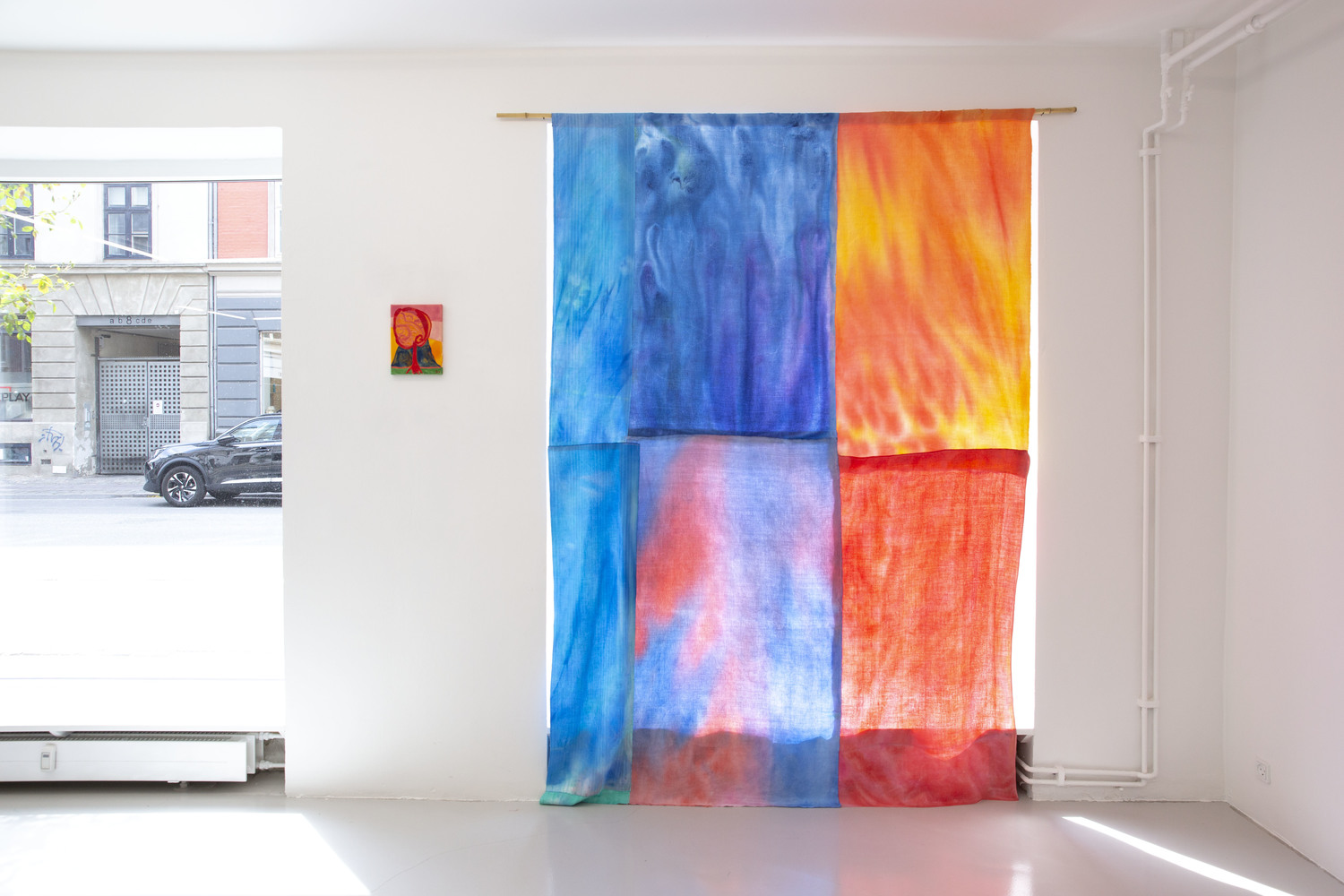 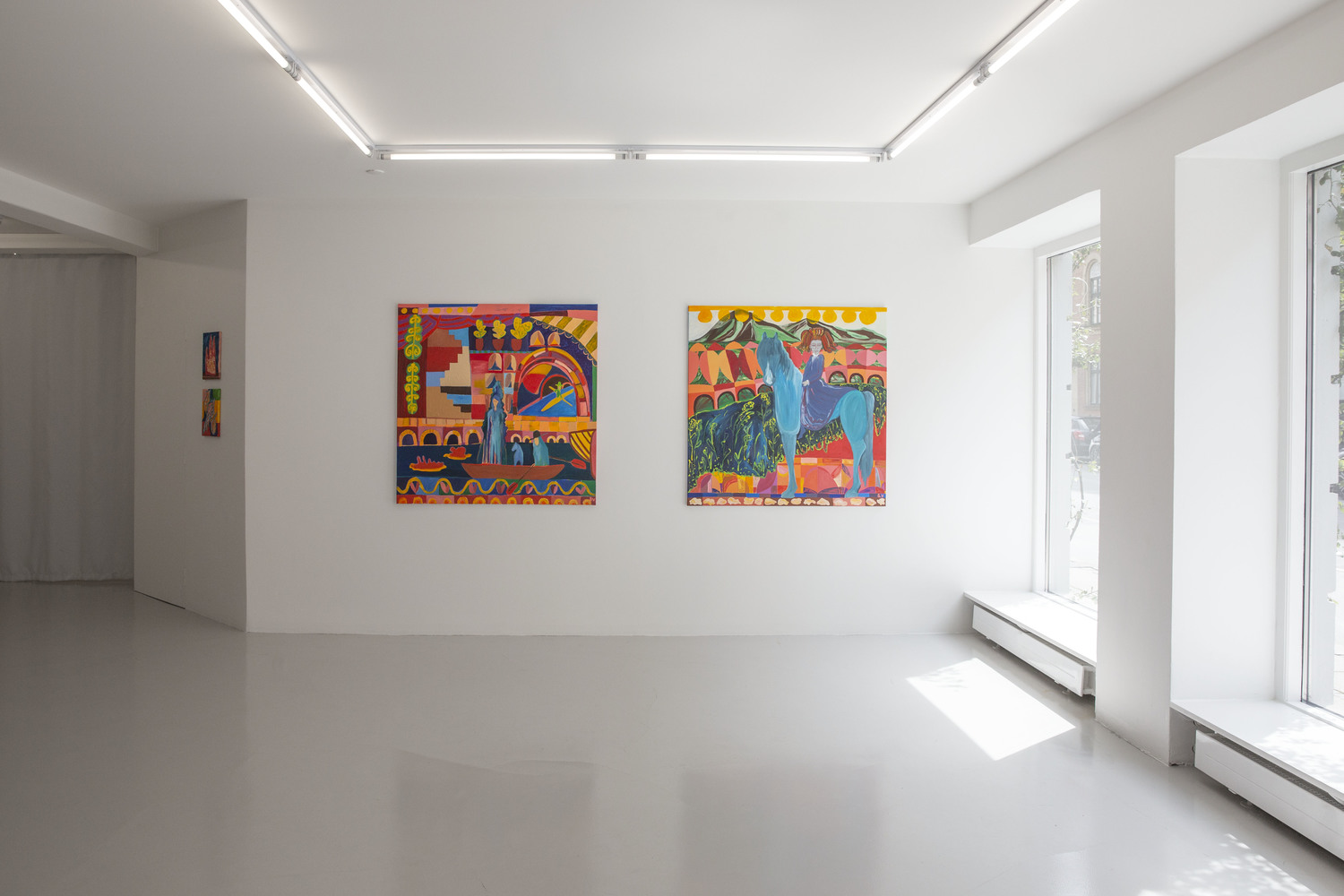 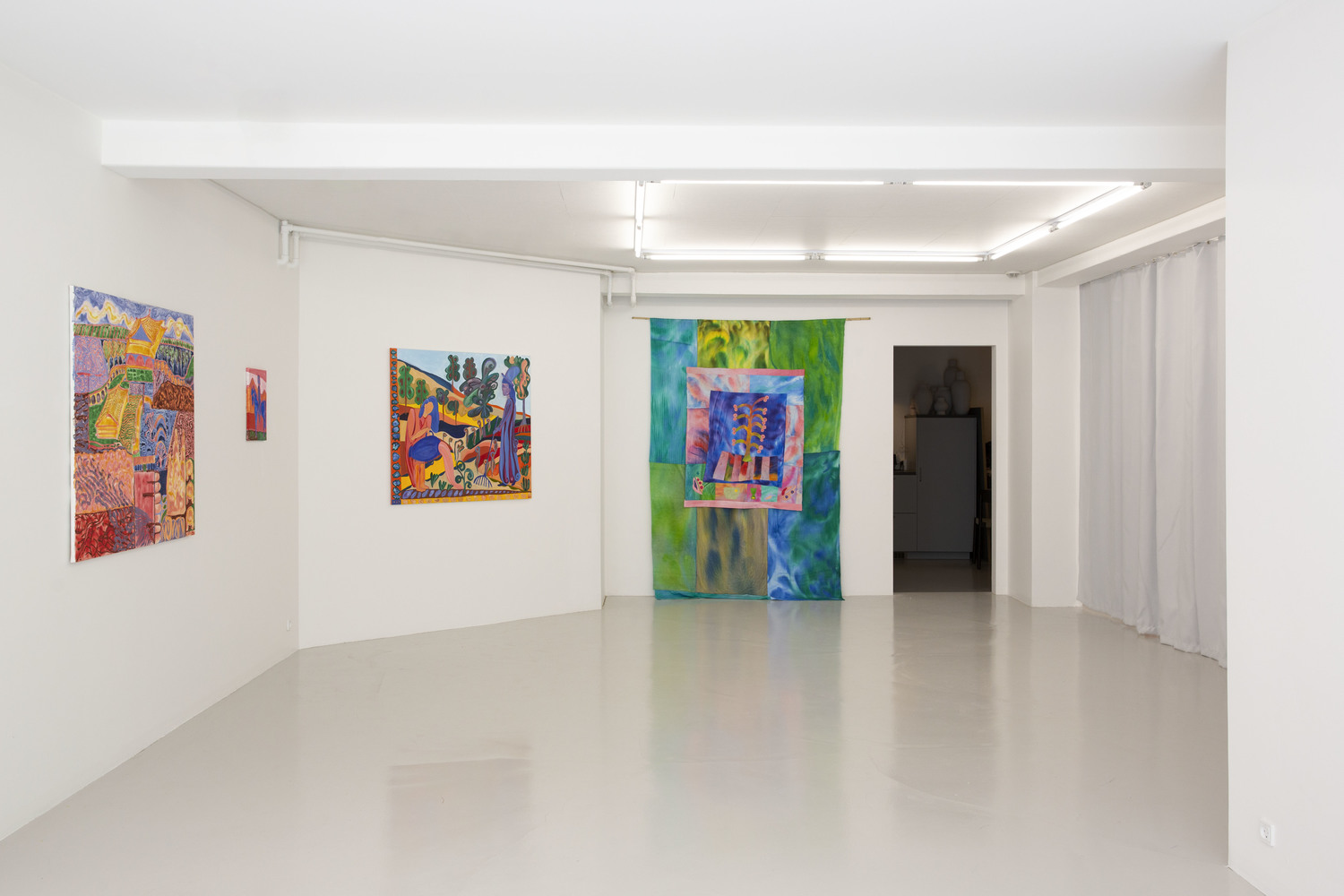 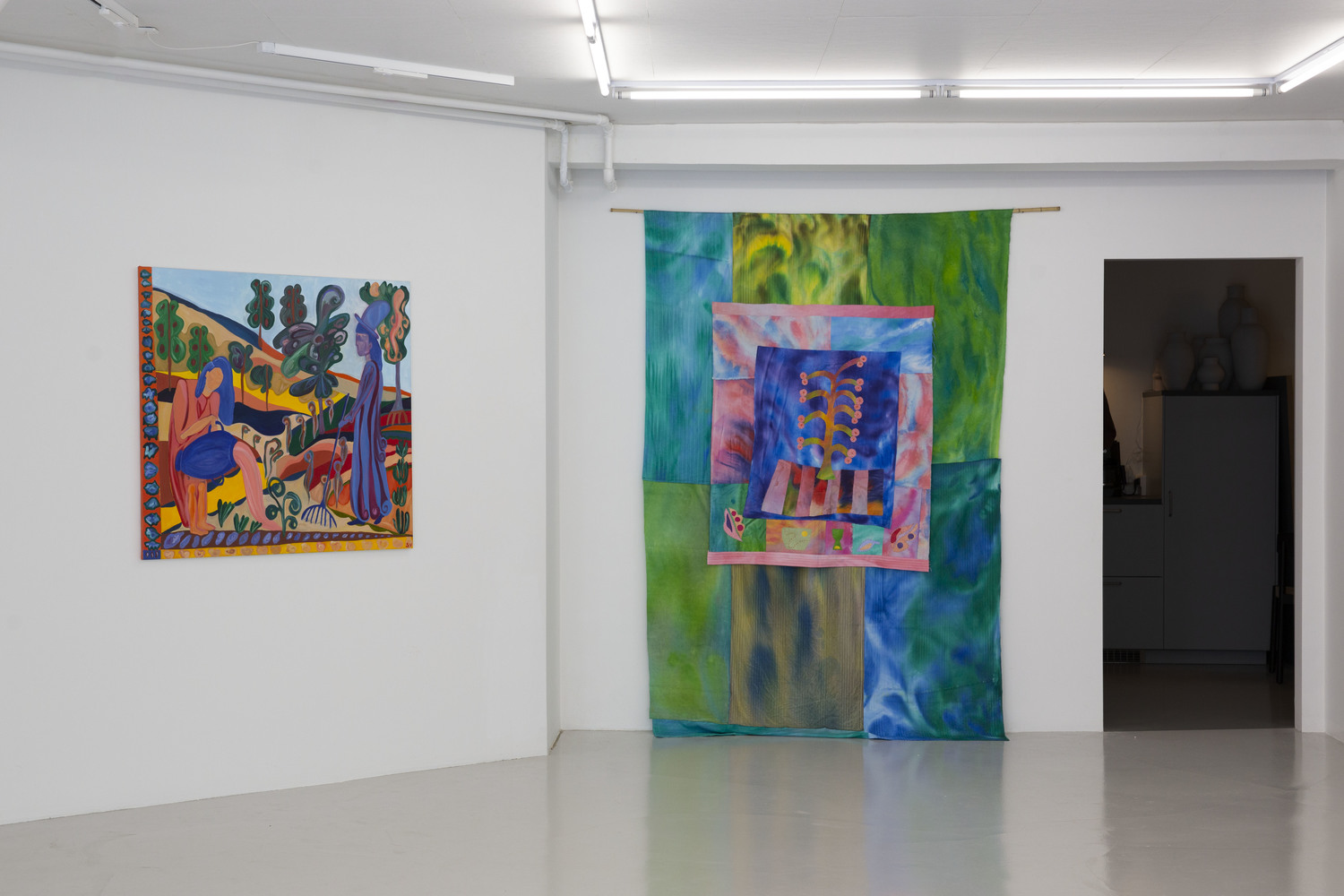 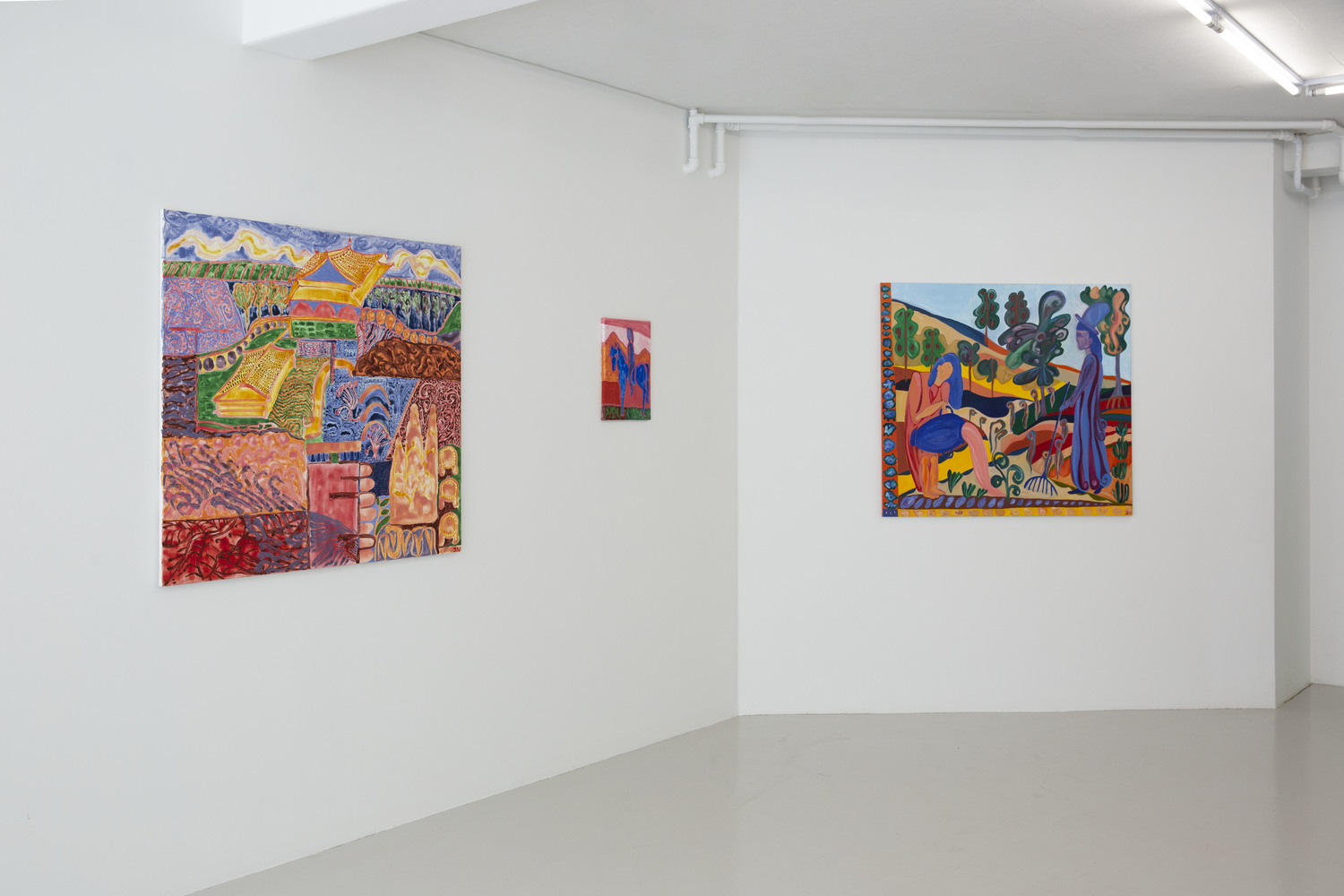 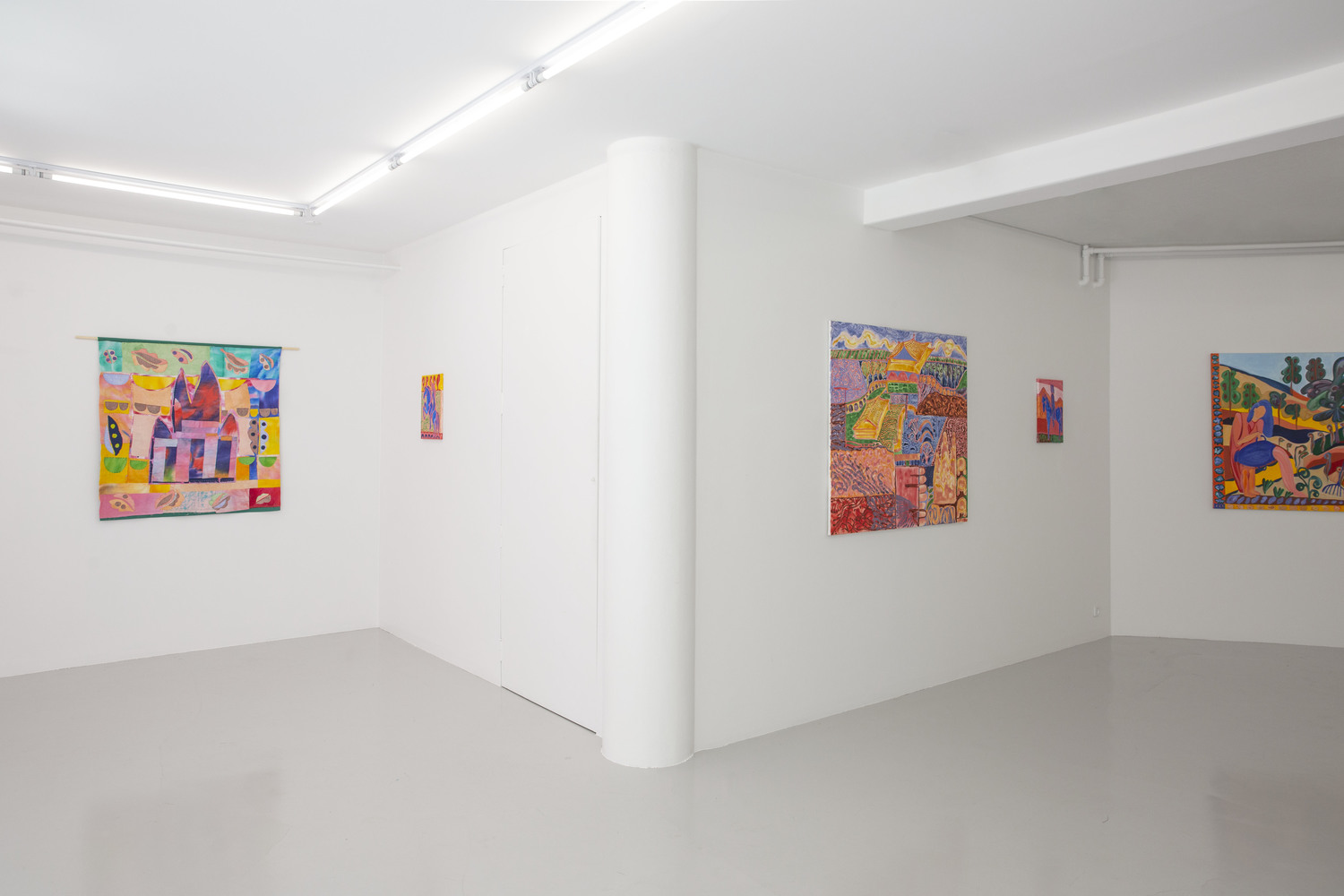 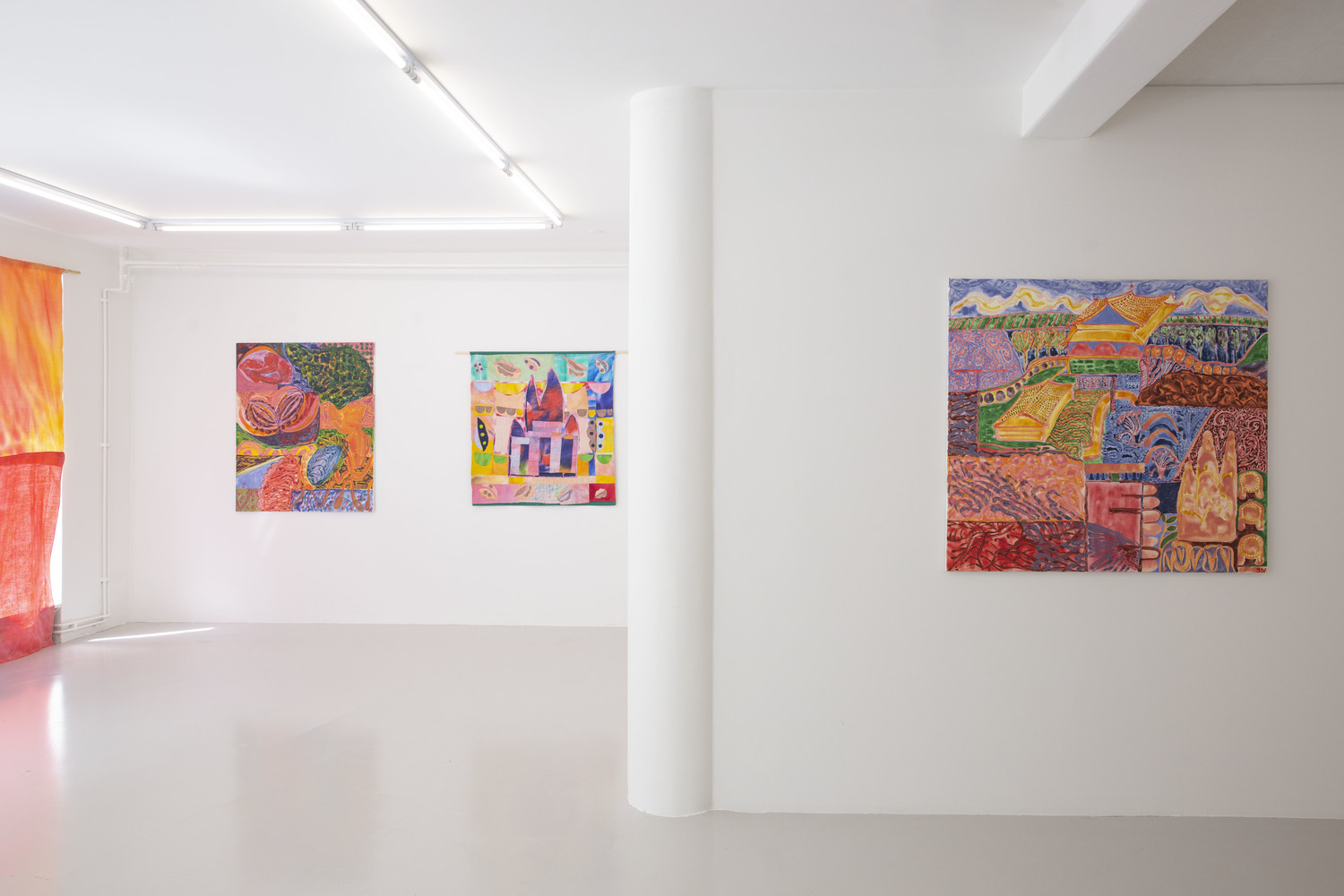